"Girl with a pearl earring" by Tracy Chevalier 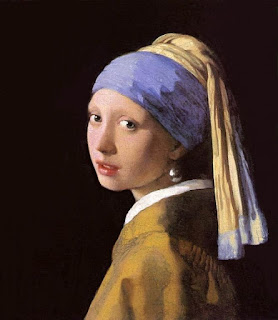 This book is the fictional story of the girl in the picture painted by Vermeer. She is Griet, a maid in the house. She cleans and runs errands and helps the great painter grind his paints and advises him on his painting. She is clearly in love with him.

It is a well-written, simple account of life in the painter's household in Delft in the mid 1660s. We learn about tile making, fish stew, religion and apothecaries. Sometimes the novel seems just a little too well-researched, for example Van Leeuwenhoek brings a camera obscura into the studio.

It is mostly about the family. Griet is a shrewd, incredibly self-possessed observer of the tensions within a family; for example, Vermeer's wife is not allowed in the studio and clearly believes that her husband sleeps with his models. One of the daughters is a bit of a minx and Griet gets off on the wrong foot straight away when she asserts herself rather than be bullied by the child; this leads to the crux.

I sometimes felt that the maid was too good to be true in every way: she was good with paints, excellent at family psychology and even great at cleaning. Nevertheless I enjoyed the book.

I wanted to find out more about Vermeer; intriguingly little is known about his life but Wikipedia mentions the painting, Van Leeuwenhoek, the camera obscura, the wife and mother in law, the conversion to Catholicism, the family pub and the street on which they lived, not to mention the children.

I do wish the novel had ended earlier. Sixteen pages before the actual end, Griet stands in the centre of the Market Square and looks at "the eight pointed star in the middle. Each point indicated a direction I could take." She considers all the points, each being a possible future. "When I made my choice, the choice I knew I had to make, I set my feet carefully along the edge of the point and went the way it told me, walking steadily."

That would have been a fine ending, leaving us wanting to know more but, like the true story of the girl in the painting, we would never find out.