Hideous Kinky is a charming short novel published in 1992 but clearly set in the days of the Hippy Trail to Marrakesh. Perhaps the author, who was 5 in 1968, was the little girl who tells the story. Esther Freud is the daughter of Lucian Freud, the painter (and thus the neice of Clement Freud and the great granddaughter of Sigmund Freud); she travelled with her Mum until she was 16 and then went to drama school.


The girl travels with her mother and her sister, Bea (and John who owns the van, and Maretta, John's mad wife who doesn't talk, and Danny who does magic) to Marrakesh. Danny jumps ship in Tangiers and very quickly John and Maretta go home. Following a magical interlude with the fabuolously wealthy Luigi Mancini (who claims to know her father who wore silver and gold waistcoats; Mancini's house later vanishes in the manner of the Arabian nights) Mum shacks up with Bilal. Running out of money (they are clearly living on maintenance but it is irregular and, given the Moroccan postal service, extremely irregular) they move to a lodging house. They become poor and hungry. Bea goes to school and starts to learn Arabic. They holiday by a lake, sleeping in the open. They hitch or travel by bus. They are dirt poor (at one stage they are reduced to begging) but there is a lot of life that is magical and colourful and exciting. Mum is utterly irresponsible (at one stage she leaves Bea with friends for months; when she returns the friends have gone and they have to search Marrakesh for Bea) but she never seems short of a boyfriend. 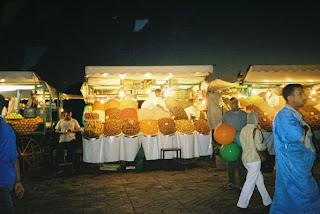 The main delight of the story is the reconstruction of the sights and sounds and smells of Marrakesh. My picture was taken in the main square at night when it turns into a bustling market with many food stalls: the narrator often ate there when Mum's money had arrived. But my favourite line is when Mum has joined a religious community; the circle of men and boys around the holy man sing hymns "in a chorus that rose to a violent crescendo and then sank to a sigh ... leaving a soft silence hanging in the air with no noise but the whisper of perspiration trickling down the walls."

A lovely story; it has been made into a film starring Kate Winslett.